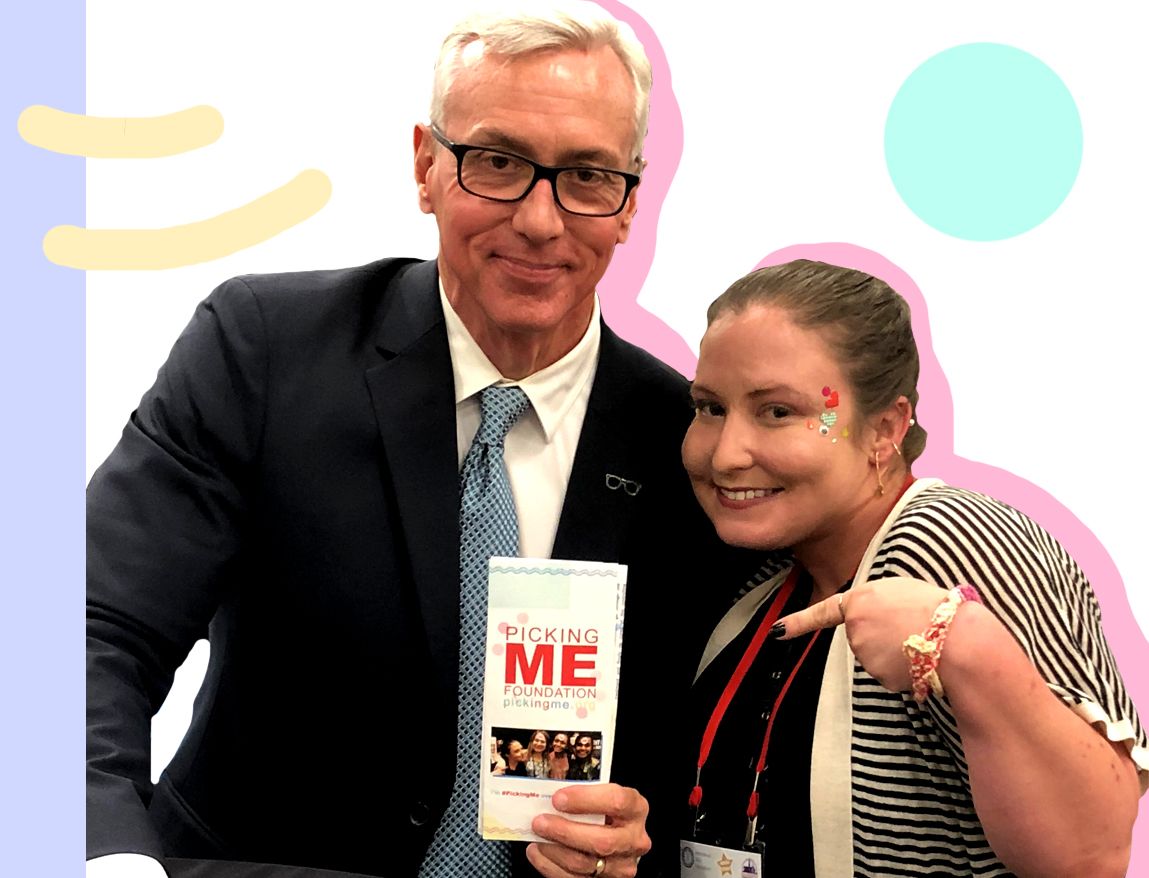 Lauren got to meet a celebrity….!

Best known for his starring role in the VH1 reality television series Celebrity Rehab with Dr. Drew, Dr. Drew Pinsky was a keynote speaker at the International OCD Conference in Washington D.C. last week. He is a board certified internist and addiction medicine specialist that has made a name for himself as a celebrity doctor on television.

How and why did you get an opportunity to meet Dr. Drew?

“I knew he was going to be the keynote speaker and I was excited because I was familiar with him and he was speaking about advocacy which is such a big part of what Picking Me Foundation is about. I made sure to get a seat as close to the stage as possible. I had planned and kind of prepped that at the end of his speech I would run up to the stage and meet him and get to tell him about Picking Me. At first, there was a big crowd around him and it was kind of hard, but this is where my height came into play and I was able to maneuver my way through and made it up to him. The crowd had fizzled down a little bit, so I actually got to have a conversation with him which surprised me.”

What did you guys talk about?

“When I mentioned Picking Me and asked if he was familiar with this disorder the first thing he said was yes. I was shocked. I thanked him for even knowing about it because that was a surprise to me. I shared as quickly as possible that I had been struggling with it for 27 years, that I almost lost my leg to it, and I’m out to use my story as a platform to let other strugglers know that they aren’t alone. He was engaging, he was listening. He took out his phone at one point and he started typing on it and I remember telling myself ‘alright Lauren, say something intriguing because his attention is wavering,’ but when he looked up from his phone he shared he had just texted one of his patients all about Picking Me because he was impressed that someone who had struggled with it [dermatillomania] had turned that struggle into an outreach organization. That meant a lot to hear, that someone of his stature in the medical community is pointing somebody that he is treating towards us for help for this disorder.”

What did he think about Picking Me Foundation?

I could tell he was most moved that I was the one who started it. He stopped me and was like ‘hey wait you started this?’ I could feel the big smile on my face when I told him yeah. I think he went up for a high five, but I thought he was shaking my hand so we had a fun moment of hand touching awkwardness. It felt good to be seen and be recognized by someone of his stature.”

Why is it important for you as the founder and CEO of a nonprofit to connect to and share your message with celebrities?

“So much of the struggle with dermatillomania is awareness. Any opportunity where I can speak on this disorder, share my story, and spread awareness I want to take especially when there’s a glimmer of an opportunity to make professionals with a certain status or outreach up to date on this illness. It seemed like the perfect opportunity to get one level higher in our own outreach. I respect a lot of his work with treating addiction as a mental illness and really highlighting and bringing addiction struggles into the mental health conversation. I felt like he’d be a good fit since he’s someone who is understanding of [people who] struggle with a disorder and how they turn their struggle into a purpose.”

“It was a really nice celebrity interaction. I’ve had instances where I’ve had the opportunity to meet public figures and they nod along with my story and maybe hug me afterwards but there was something with Dr. Drew’s immediacy in reaching out to share our info with someone he was working with and giving me a pat on the back to keep going that I really connected with.”

How did what Dr. Drew was like in person compare to what you thought he’d be like based on seeing him on television?

“Really what I learned [about him] is how much he is doing outside of his television roles to bring addiction into the mental health world. But, he’s still very much the same person on television as in person. I could tell that even though I was talking a mile a minute, he was calm, receptive, and engaging to my story and my work.”